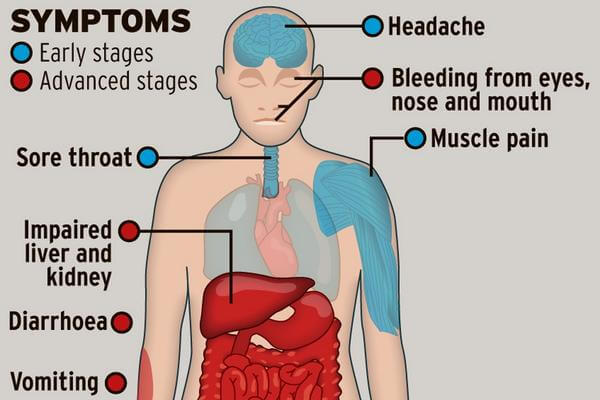 HOW IS EBOLA CONTRACTED?

The good thing about Ebola is that it isn’t a contagious disease unlike other commonly occurring diseases like Influenza, which tops the list of contagious diseases and is widely spread from person to person via droplet infection, coughing or sneezing.

As for Ebola, it is initially contracted from primates like monkeys, apes and fruit flies. Once it is contracted by a human being it can be further transmitted through:

The Ebola Virus Disease with its fatality threats has symptoms that can be masked initially as any other commonly occurring infectious disease. Initially symptoms occur abruptly within 2-10 days of contracting the Ebola Virus. The initial symptoms are:

As the disease progresses, patient may experience other strong symptoms like:

No particular treatment has yet been established for the Ebola Virus Disease yet, but the only treatment patient receives is palliative care and symptomatic treatment for the symptoms. The

Biggest challenge in the treatment of Ebola Virus Disease is the drop in the number of cells that allow the blood to clot (platelets). As a result, hemorrhages occur internally as well as externally, and thus patient usually dies of extreme blood loss.

Although the survival rate is low, patients who get cured from Ebola Virus Disease generally develop antibodies in their blood for 5-10 years.