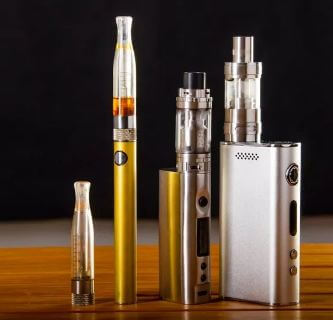 Electronic cigarettes (e-cigarettes) came into existence as a way to avoid or replace smoking, which became fashionable over time. E-cigarettes were first introduced in the Chinese market in 2004 and then spread all over the world. The Chinese company began exporting it to major markets between 2005 and 2006. There are more than 460 different brands of e-cigarettes in the market.

Between 2011 and 2015, e-cigarettes became so popular with high school students that demand increased by 900%. In 2016, the number of students using e-cigarettes in middle and high schools reached 2 million. Forty percent of them were new smokers who had never smoked before.

What is an e-cigarette?

Just as traditional smoking is called “smoking”, so is the process of smoking e-cigarettes called vaping. An e-cigarette is a battery-powered device that emits vaporized nicotine or non-nicotine while the user inhales.

Its purpose is to use smoking without smoke. An e-cigarette is a long tube that usually resembles a cigarette, cigar, pipe or pen. Most are reusable with reusable cartridges but some are also disposable.

E-cigarettes are also known as e-cigarettes, electronic nicotine supply systems, vaporizer cigarettes and vaping pans. It was introduced to the market as a way to quit or quit smoking, but when research showed that it is also very harmful to health, in 2016 the US Food and Drug Administration (FDA) banned it. Start enforcing rules about sales, marketing and production.

Most e-cigarettes contain nicotine, which is an addiction and triggers changes in the teen’s brain. It also affects the mother and baby during pregnancy and its use can affect the development of the fetus.

An animal study published in January 2018 looked at how the nitrosamines in e-cigarettes can damage DNA. The researchers found that inhaling e-cigarette smoke significantly reduced the ability of lung cells to repair.

In addition, according to a study on rats, the smoke damaged the lungs, bladder and heart of rats. The research concluded that e-cigarette smoke could potentially cause lung and bladder cancer in humans as well. Can cause heart disease.

According to a foreign news agency, US President Donald Trump intends to impose a complete ban on e-cigarettes, its devices and nicotine with different flavors because e-cigarettes are affecting people’s health and they are on the verge of death.

American doctors say that people are suffering from respiratory diseases due to the use of nicotine with different fruit flavors in e-cigarettes. It is estimated that more than 3 million children in the United States are addicted to e-cigarettes.

What should be the diet plan during pregnancy?
Asthma is a chronic disease
To Top