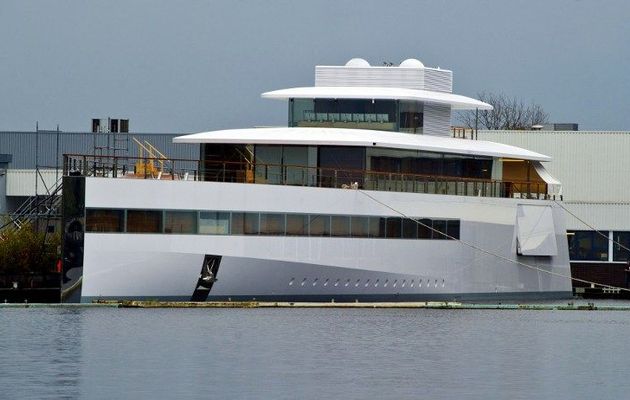 Venus – The Mega Yacht which was launched in October 3023 – is now impounded at the port of Amsterdam after facing a legal payment claim from the designer of Yacht Mr. Starck. According to Mr. Starck, this splendid boat was designed by him under the agreement of total fee Euro 9 Million for the complete project. However, his 3 Million Euro out of 9 Million is still pending and he raised this payment dispute in the court. The court has seized the boat at Amsterdam Port and is not allowed to move until finalization of case and clearance of remaining dues to Mr. Stack.

Venus is the custom-built boat by Mr. Steve Jobs who could see his masterpiece in the ocean and died in 2011. Mr. Steve Jobs and Mr. Starck worked together on this beautiful project which was the dream of Mr. Jobs. Venus looks very simple and Jobs gave this name by inspiration from Roman goddess of love “Venus”. The measurement of boat is 360 feet in length with 20 feet high windows. The passenger department is separated from command area by means of 40 feet windows. The boat is entirely made up of aluminum, which gives it delicate and dashing look even in simple style. The total cost of this project was 100 million euro.

Up till life of Mr. Jobs, the situation was entirely different as Starck and Jobs were close friends and there was no detailed agreement of payment between them. Now the company of Mr. Starck “Ubik” is facing some problem to prove its claim of remaining fee amount. This reality was unveiled by Mr. Roelant – Mr. Starck’s company lawyer. In the response of this statement, Mr. Gerard Moussault – The lawyer of ship owners – stated “I cannot comment at all on this, sorry.”